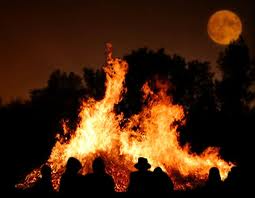 Don’t you just love Halloween?  This whole time of the year – what with its Harvest Festivals and its Renaissance Festivals; the decorations and costumes and make believe; honestly, I find it refreshing, especially Halloween since in spite of the commercialization, it is still instantly recognizable as the pagan holiday that was celebrated by many of our ancestors for centuries before Christianity was ever introduced.

I find it interesting that in spite of the best attempts of the early Christian Church, the festival of Halloween (or Samhain) was one that has resisted all attempts at Christianization.  They may have replaced Yule with Christmas; they may have reduced the celebration of Imbolc to that of a groundhog predicting the length of winter; they may have been able to replace the Spring Equinox (an important fertility right) with the birth of Christ.  But in spite of everything, Samhain remains easily identifiable as a pagan holiday.  But what is the history of Halloween? Better yet, why is it so important to so many people?  What made it so important that it was able to stand up to everything that was thrown at it?

There really is no point in going into great detail regarding the history of Halloween.  You can find the accounts in hundreds of books and thousands of websites; all variations on a theme.  You’ll read in some places about how originally it was a pagan celebration of the end of the harvest; a celebration of the death of the Horned God (the consort of the Great Goddess) who had to die in order to ensure that the sun would be reborn and would guarantee a new cycle of fertility.  Others will emphasize the fact that it is a day when the veil between the worlds was so thin that spirits and dark creatures were free to mix and mingle with humans. You’ll hear people telling you that it is nothing more than a harvest festival and others who claim that it is a holiday dedicated to the devil himself.

All of these claims have the ring of truth; and equal tones of myth and legend, but what is it really?  Better yet; what does the celebration of Halloween – or Samhain mean for us, today?

One of the reasons that Samhain is still such a touchpoint in our culture is due to the fact that it touches a very deep and primitive nerve.  In ancient times Samhain was a time to celebrate endings.  It marked the end of the Celtic yearly cycle and the beginning of their New Year. Here in the northern hemisphere it marks the end of our growing season which is marked by the bringing in of the harvest and is punctuated by the falling of the leaves; a sure sign of the approach of winter.

But it wasn’t just the ending of the growing season or the ending of the cycle of the leaves, it also came to be associated with the cycle of life and the celebration of how, even though death and loss is part of the cycle of life, so too death and endings mark the begining of a new season; a new cycle; and the promise of new life with special attention beging given to those loved ones who had passed on and the inevitability of the death of all physical things.  But so too was it kept in mind that just as all things end and it may appear that the fields are fallow, the promise of spring and of a whole new season of life lies just under the surface waiting for the warmth of the sun.

Indeed, just as this season once it marked the time to stock up for the winter; to bring in firewood and fill the pantry with supplies for the cold months, even today you see homeowners buttoning up their property; covering rose bushes and making sure their oil tanks are filled.   Today you see many home owners using this time of the year to clear their yards of debris in preparation for winter storms and in making sure that their rain gutters are cleared out and their roof is free of leaks.  You’ll also find that many people use this time of the year to clear out their closets and cupboards of those things that they don’t need in order to make room for those things that they might need for the cold months.

So too this can be a time to prepare for what is yet to come.  And what better way to do that than to rid yourself of all of those things that might be weighing you down and detracting from your peace of mind?

Even if you don’t celebrate the season, there is nothing wrong with using it as a touch point for getting your own house and mind and life both literally and figuratively ready for winter.  Divest yourself of everything that makes you unhappy; let go of those things that weigh down your energy and make you depressed.  No need to head into the long dark months of winter weighed down by baggage that will just make it worse.

Instead, why not clear out all of those spaces?  Clean them out, but resist the urge to fill them up with something; leave them empty; an invitation to the universe that you are ready for something new and exciting to enter your life.  It is an ending, yes, but also a beginning.

Like a fallow field; one that has been divested of its harvest and left empty and bare; you’ll be ready when it is time to plant the seeds of a new crop; one that will make your life richer with more purpose and meaning.