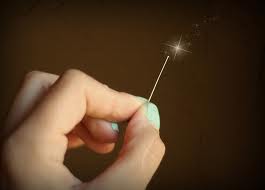 Did you know that the term “How many angels can dance on the head of a pin?” was actually a derogatory phrase? It was used to discredit scholastic philosophy at a time when it still played a significant role in university education.

Well, that’s what some people believe.

But of course a serious discussion of the phrase “How many angels can dance on the head of a pin” would assume a belief in angels…and dancing…and pins.

Maybe I don’t believe in pins!

Pins are sharp, they draw blood, and while some argue that pins are useful, that they help hold things together and can give structure to otherwise random and unrelated objects, I would have to argue that the same applies to Velcro, and superglue, and ticky tack. And neither Velcro or superglue or even ticky tack have the annoying habit of coming loose from what it is they’re supposed to be holding together at inopportune times and poking unwary victims with its pointy end.

That isn’t to say that Velcro and superglue and ticky tack don’t have their problems as well, after all, Velcro not only sticks to anything fuzzy including fuzzy things you would really rather it didn’t stick to, and superglue can stick TOO well -and not always to those things you had in mind. As to ticky tack, as incredibly useful as it is, it has a limit for the amount weight that it will hold. But still, so do pins.

So I say PACK UP THE PINS! Send them to those philosophers that are still debating the question of how many angels can dance on the head of one.

Of course it helps to remember that when the expression was coined, pins had flat heads. Today they make pins with rounded little multi-colored spherical heads, does the concept still apply? I mean, can ANYTHING dance on a sphere?

(…pauses for a facepalm…)

Yes, I know, we do. We dance on a sphere. At least those of us that dance, dance on a sphere, and a sphere that is simultaneously whirling around the sun and rocketing through space at unbelievably fast speeds.
If you take it a step further, all of life is a dance; a dance that is taking place on the head of this spherical, blue and green pin that glitters all by itself out here in the vastness of space.
Life dance on this sphere; we dance on it. We laugh on it. We live. We love, and we contemplate the metaphysical properties of angels…and the sticking power and properties of pins.

So does the fact that we dance on it make the world the head of a pin?
Better yet, does that make us angels?